Contracts have become an integral part of modern society. Businesses, entities, and/or individuals enter into contractual agreements on a regular basis even more often than they may realize. A contract is a legally binding agreement between two or more parties that details the rights and obligations of each party. Basically, it spells out what is expected of each party from a particular transaction. While contracts may be oral or written, certain types of contracts must be in writing in order to be legally enforceable. This mainly applies to contracts involving amounts of money exceeding $500.

However, no contract is created perfectly and disputes are inevitable. Contract disputes in Los Angeles can happen for a number of reasons, including disagreements over certain terms or definitions in the contract, misunderstanding/misinterpretation of certain terms, errors in the contract, fraud, and coercion, among other issues. Breach of a contract or one party’s failure to fulfill his or her obligations as per the terms of the contract is perhaps the most common reason for contract disputes in Los Angeles.

If you’ve already litigated your contractual dispute, it is important that you find an attorney that is well-equipped to defend your contract arguments on appeal in a practical, effective, and cost-effective manner. A Los Angeles contract appeals lawyer at Gusdorff Law can help individuals and businesses involved in contract disputes preserve their rights by distilling complex and nuanced issues arising out of contractual disputes for the appellate judges. Contact Gusdorff Law today at 818-877-4515 for assistance with your contract appeal.

What Are Contract Disputes?

What Types of Disputes Does Gusdorff Law Handle?

Our firm handles appeals from judgments in a variety of contractual disputes, including:

What Are the Elements of a Valid Contract?

Contract disputes happen quite frequently in the world of business. There are many different types of contract disputes.
However, regardless of what type of contract dispute you are dealing with, one of the first and most important things that you need to do is determine whether you are in a valid contract. There are a number of elements that need to be present for a contract to be deemed valid. This means that the absence of any of these components renders your contract void and can’t seek legal remedies for any damages or losses caused by the dispute.

For a contract to exist, one party must present something of value in exchange for something else of value from the other party. This is known as an offer. Once this offer is presented to the other party, they can either accept or reject it. Acceptance is when the offer is accepted.

Another important element of a valid contract is consideration. This is the benefit or something of value that the parties stand to receive from performing their part of the contract. This can be in the form of money, service, an object, rights, interest, or anything else of value to the party.

For a contract to be valid, both parties subject to the contract must have actually intended to form a valid enforceable contract. To avoid a situation where a lack of intention is used as a defense, many people choose to put their contract in writing.

This element is concerned with the legality of the subject matter of the contract. A contract is not legally enforceable if it involves illegal promises or considerations.

Not everyone qualifies to enter into a contractual agreement. Parties subject to a contract need to be of a certain age, mental capacity, financial standing, etc. In some cases, a past criminal record can make a person ineligible to enter a certain contract.
Only when all of these elements have been established that a contract can be deemed valid and legally enforceable. In case of any dispute that can’t be resolved amicably by the parties involved, the dispute can be resolved through court proceedings and damages awarded if necessary.

What Are the Reasons for Contract Disputes in Los Angeles?

Here are some of the reasons why a contract may be disputed:

A breach of contract dispute arises when one party fails to fulfill its obligations as per the terms of the contract. There are two main types of contract breaches:

This is when one party’s failure to fulfill a certain obligation renders the entire contract completely useless and irreparable. This is also known as a total breach of contract. In such instances, the affected party doesn’t have to fulfill their contractual obligations and they have a right to seek damages against the breaching party. 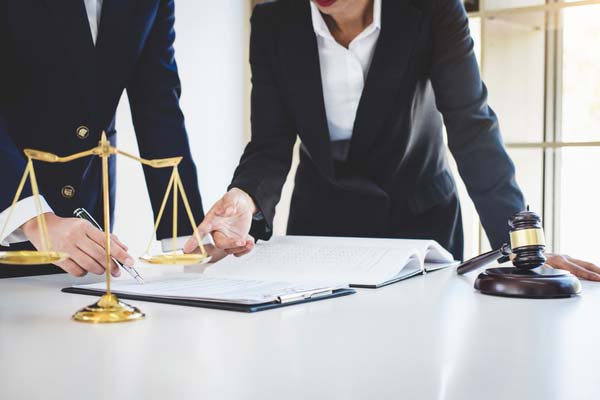 Also known as a partial breach, a minor breach arises when the breach of contract doesn’t affect the entire purpose of the contract. In this instance, both parties will still be required to fulfill their part of the contract. However, the affected party still maintains the right to take legal action against the breaching party.

In some cases, especially when a contract is poorly worded, there may be confusion over the meaning of certain terms of the contract. This often leads to either party misinterpreting or twisting one or more sections of the contract in their favor.

As stated earlier, there has to be a mutual intention to create a valid enforceable contract. If one of the parties was forced or tricked into entering a contract that they never intended to form, this can be a cause for dispute. One party may include clauses specifically designed to dupe the other party into giving up certain rights or considerations without realizing it.

Errors in the Contract

Sometimes, errors in a contract may be discovered long after the contract has been put into effect leading to a dispute. This may necessitate redrafting the contract, making the necessary corrections, and repeating the process of offer, acceptance, and negotiation.

Disputes During Offer and Acceptance

This dispute happens during the offer and acceptance stage where one or more parties express concerns regarding certain aspects of or the entirety of the contract, which may cause them to not accept the contract. This will necessitate fresh negotiations and offer.

What Should I Expect During a Contract Dispute?

When a contractual dispute arises, there are various ways in which the issue can be resolved:

The first step to resolving a contract dispute is always to try and negotiate a satisfactory resolution with the other party. It is the quickest, easiest, and cheapest method of conflict resolution. It is advisable to record all verbal agreements in writing.

If no progress is made through negotiations, you may consider involving a neutral third party or mediator. The work of a mediator is to assist both parties to reach an amicable resolution. The mediator doesn’t have the power to make a final judgment, and the dispute is only resolved when both parties willingly agree to the resolution.

Parties subject to a disputed contract can also choose to have it resolved by an arbitrator. Unlike in the case of a mediator, an arbitrator’s decision is final and binding. While less formal, arbitration resembles a trial in a number of ways including the presentation of witnesses and cross-examination of opposing witnesses. The arbitrator or panel of arbitrators will consider all the evidence presented and make a legally enforceable decision.

If a resolution can be achieved through alternative resolution methods, you may consider settling the dispute through the court system. Litigation involves the trial process and the outcome is legally binding. However, any dissatisfied party has the option to appeal the decision.

Depending on the nature of the contract dispute, there are various types of legal remedies that can be sought to resolve a contract dispute including monetary damages, restitution, contract reformation, specific performance, and contract rescission.

Why Should I Hire Gusdorff Law to Handle My Appeals of Contract Disputes in Los Angeles?

If you or your business find yourself needing help regarding appeals of contract disputes, you need to bring in the expertise of an experienced and skilled Los Angeles appellate lawyer. Appeals of contract disputes requires true knowledge of the law and attention to details. You need someone who can scour documents to find any mistakes during the legal procedure in the most effective manner.

This is what you get with Gusdorff Law. With over 15 years of experience in the industry, we know we have what it takes to ensure you receive a fair hearing and that there were no legal errors during the court’s resolution of the contract dispute.

Many times, cases are ultimately won or lost at the appellate level.  Janet Gusdorff combines written and oral advocacy skills with a solid knowledge of procedural and substantive law.  Gusdorff Law has long-standing experience handling appeals of contract disputes in Los Angeles and we will see to it that you get the fair and just hearing that everyone deserves.

Give us a call today at 818-877-4515 for the best legal guidance and assistance with issues regarding appeals of contract disputes in Los Angeles.